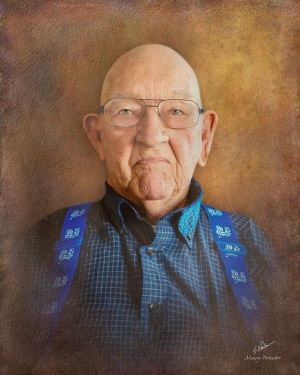 Frederick Arthur “Fred” Webster, passed away peacefully from this life to be with his savior, his wife Betty, parents and other loved ones on May 11, 2022. He was 85 years old. Our dad was born on the farm just west of the Woodville Baptist Church, near Wyaconda in Clark County on July 4, 1936, to Cecil “Hardy” and Retta Rachel Colvin Webster.

Like many little boys growing up, Dad attended Mt. Tabor school and then graduated from Wyaconda High School. He farmed alongside his father and raised turkeys for several years before moving to Florida, then returning in 1970 to Clark County.

Our Dad was granted his wish to be with Jesus and other family members; his parents Cecil “Hardy” and Retta Rachel Webster, his brothers; Eugene and his wife Dorothy, Junior and his wife Leela and by one sister; Mabel and her husband Glen. He will be with many other loved ones and friends.

Funeral services honoring Fred’s life will be conducted at 1:00 pm on Monday, May 16, 2022, at the Wilson & Triplett Funeral Home in Kahoka. Visitation will be held from 11:00 am until the time of services at the funeral home. Pastor Glen Yoder will officiate. Interment will follow at the Wyaconda Cemetery. Memorial contributions in memory of Fred are suggested to the Wyaconda Cemetery. You are invited to share your memories of Fred and leave a condolence at www.wilsontriplett.com

To order memorial trees or send flowers to the family in memory of Frederick "Fred" Webster, please visit our flower store.