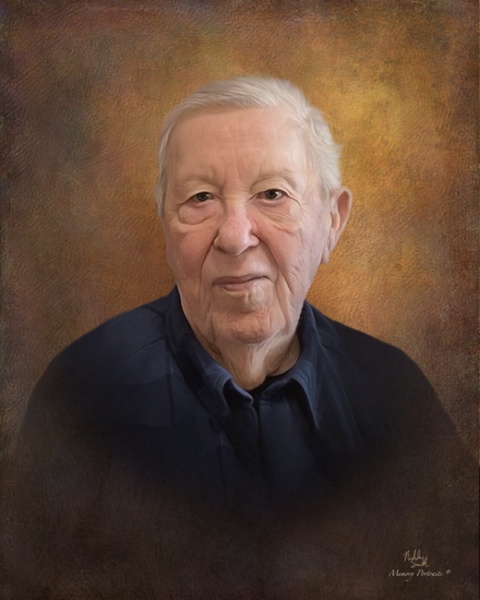 He was born on February 16 th , 1928 at Gregory Landing Mo., the son of Frank L. Winters and Elsiebelle (Anderson) Winters. After Elsiebelle’s passing his father married Mae (Jesberg) Winters who was a great part of Bud’s life.

He is survived by his wife Nina, and a sister-in-law, Shirley Wood. He was preceded in death by his parents, Frank and Elsiebelle Winters, Mae Winters, parent in laws, Oren and Alberta Wood, Sisters and spouses, Madeline & Dave Davidson, Jessibelle & Pete Schlotter, Virginia and Bruno DelGuzzi, and brother in law Dale Wood, Sister in law Linda and Herb Hawkins, GeeGee and David Hamma, and infant grandson Bo Ragan.

Their seven children were blessed to have a father & mother who always took then on vacations out west to visit his sisters in the state of Washington with sight seeing along the way; Lake of the Ozarks almost every summer for water skiing and swimming. After purchasing a cabin at Gregory Landing, water skiing became a weekly affair.

Their home was always open to their children’s friends for big meals, and fun times on the farm.

Bud was a farmer, and then later becoming an entrepreneur. Owning gas stations, antique shops, firework stands, a grocery store, and then opening the Missouri Territory Restaurants located in Wayland and Hannibal Missouri, and the Cliffside Bed and Breakfast at Hannibal, Missouri.

After Bud and Nina moved to his present house at Twin Lakes Golf Course he enjoyed watching the geese and all the different birds at the numerous bird feeders Daan filled daily.

Family was always coming and going daily. Grandpa Bud always enjoyed his grandchildren visiting, he welcomed them with a smile, and always had a story to tell. He looked forward to a drive on Saturdays for ice cream and to Memphis Missouri for lunch.

Bud enjoyed playing cards from an early age. He played cards every opportunity he had, his favorite being cribbage. He instilled the loved of cards in all of his children. He had many interests, a few being spending time exploring on his computer and taking pictures. Bud was also a well known bus driver, like his dad was before him. In fact, Bud even drove his dad's school bus before he had a license! Once his dad retired he stopped until his own kids started school, then he drove again for Gravel Hill and also to Canton High School.  Once the schools consolidated, Bud, once again, retired.

H is true love Nina was always by his side. In the evening they would spend time watching his shows. They were a very special couple.

Funeral Services were held at 11:00am on Wednesday, July 28, 2021 at the Kahoka Christian Church.

A visitation was held from 10:00am until services on Wednesday, July 28, 2021 at the Kahoka Christian Church.

Memorials were directed to the Bluff Springs Cemetery Fund.

To order memorial trees or send flowers to the family in memory of Franklin Winters, please visit our flower store.