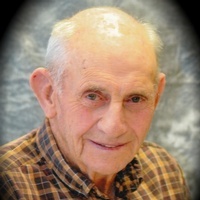 Ed was born July 1, 1929 to James Edward and Sylvia Mae LaFrenz Anderson at their home in rural Wyaconda. He resided his entire life in Clark County except for serving in the U. S. Army during the Korean Conflict.

Ed was a devout steward of the land, farmer, and provider for his family. Throughout his lifetime he worked tireless hours raising quality crops, cattle, and hogs efficiently and economically.

Ed was a graduate of Wyaconda High School and a member of the New Woodville Baptist Church. For several years Ed served on the Board of Directors for Peoples Bank of Wyaconda and the Clark County Rural Water District. In 2016, he proudly received the Conservation Stewardship Award from the Clark County Soil and Water Conservation District. He was a member of the National Cattlemen’s Beef Association and the Missouri Cattlemen’s Association, respectfully.

He was preceded in death by his wife; his parents; a nephew, Rick Hines; brother-in-law, Wade Weber; and grandson, Grant Edward Guarin.

Friends called at Wilson Funeral Home after 10:00 a.m. on Sunday with family receiving friends from 1-3 p.m.

In lieu of flowers, the family requests memorials be made to the Wyaconda Cemetery or the Clark County Nursing Home for a blanket warmer.

To send a flower arrangement to the family of Francis "Ed" Anderson , please click here to visit our Sympathy Store.

Friends may call at Wilson Funeral Home after 10 a.m. Sunday with family receiving friends from 1-3 p.m.

Friends may call at Wilson Funeral Home after 10 a.m. Sunday with family receiving friends from 1-3 p.m.

To order memorial trees or send flowers to the family in memory of Francis Anderson, please visit our flower store.