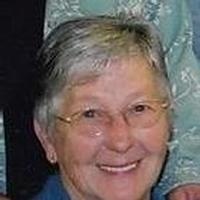 Frances T. McAndrew, age 76, of Kahoka, MO, died early Sunday, May 19, 2013 at her home surrounded by family following a brave battle with cancer.

Frances was born June 11, 1936 in Keokuk, IA, one of eight children of Melvin and Jennie Newcomb Hayden.

She was preceded in death by her parents; her husband; a daughter, Laurie McAndrew; two brothers, Melvin Hayden and Joe Hayden; and three sisters, Catherine McGhghy, Jane Ann Lawson and Marylou Ames.

Frances was a graduate of St. Peter's Catholic School in Keokuk, IA and was a faithful member of St. Michael's Catholic Church in Kahoka.

From 1973 to 1991 she and Tom owned McAndrew Package Liquor in Kahoka. Most of her life and her favorite job, however, was caring for her home and children. She was very creative and sold handmade dolls, stuffed animals and most recently American Doll clothes. Her flower gardens were beautiful pictures as well and her love of flowers extended to her neighbors yards, where she would also lend a helping hand. She loved her neighbors and her neighborhood. She and Tom had enjoyed going dancing and attending auctions and following his death she and her sister continued going to auctions as well as attending yard sales and visiting green houses. She loved taking care of others more than herself. She and Tom both had a sense of humor that carried them through tough times.

A Mass of Christian Burial was held Thursday, May 23, 2013 at 10 a.m. at St. Michael's Catholic Church in Kahoka with Father Thomas Alber, officiant. Burial was in the Kahoka Cemetery.


Memorials may be made to the Clark Co. Local Cancer Fund.

To send a flower arrangement to the family of Frances T. McAndrew , please click here to visit our Sympathy Store.

To order memorial trees or send flowers to the family in memory of Frances McAndrew, please visit our flower store.