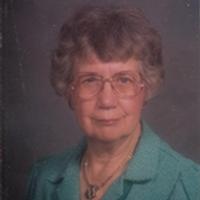 Fay was born December 28, 1919, in Wayland, the daughter of Howard and Anne Williams Butler.

Survivors include a brother, Frank Butler, of Richmond, VA, and four generations of nieces and nephews.

She was preceded in death by her parents; her husband; a sister, Daisy Robison; and two brothers, Max and Jessie Butler.

Fay was a graduate of Wayland High School and had been a homemaker all of her married life. She was a faithful member of the Southern Baptist Fellowship in Wayland and involved in its' activities as long as her health permitted. She had also been a member and very involved in the University of Missouri Extension.

Graveside services were held Monday, January 11, 2016 at 1 p.m. at the Frazee Cemetery, rural Alexandria, MO with words of comfort by Pastor Dan Steinbeck.

Friends registered at Wilson Funeral Home in Kahoka between 9 a.m. and 11 a.m. Monday.

Memorials in lieu of flowers are suggested to the Northeast Missouri Hospice or the Southern Baptist Fellowship Church in Wayland.

To order memorial trees or send flowers to the family in memory of Fay Maddox, please visit our flower store.