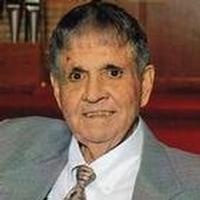 He and Joanne McDermott were married on October 15, 1955 at St. Joseph Catholic Church in Canton, MO. They were blessed with four children, eleven grandchildren, eight great-grandchildren and 57 years of marriage.

He was preceded in death by his parents and brother-in-law, Charles Kirchner.

Eston graduated from St. Patrick High School and served in the U. S. Naval Reserve for eight years. He had farmed and was a retired Farm Bureau Insurance Agent. As local agent, he built the new building at its present location.

Eston was a member of St. Michael's Catholic Church in Kahoka, was a member of the Knights of Columbus and 4th Degree Knight. He was also past state secretary of the Knights.
He had served on the A.S.C.S. board, the Clark Co. Rural Fire Department board, and was former Chamber of Commerce and Kiwanis member.

Eston was also a man of strong faith. He never questioned when someone was in need, but reached out to help in any way he could. He grew a large sweet corn patch just so he would have plenty to give away. He was so very proud of his family and his grandchildren and great grandchildren were his greatest blessings.

A Mass of Christian Burial was held Wednesday, November 21, 2012, at 10 a.m. at St. Michael's Catholic Church in Kahoka with Rev. Nicholas Reid officiating. Burial was in the Kahoka Cemetery.

Memorials may be made to the Clark Co. Rural Fire Department or Industrial Opportunities (Sheltered Workshop).

To send a flower arrangement to the family of Eston Boudreau , please click here to visit our Sympathy Store.

To order memorial trees or send flowers to the family in memory of Eston Boudreau, please visit our flower store.