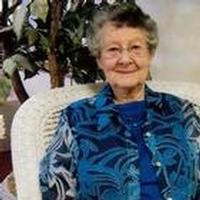 Esther was born September 4, 1916 in Brandon, IA, the only child of Earle V. and Ruth A. (Boyack) Bagenstos.

She attended all twelve years of school and graduated from Independence High School in Independence, IA, in 1934. It was at a gathering there that she met her future husband, George W. Sowers, from Revere, MO. She received an additional year of education at Independence Junior College before marrying George at her grandmother's home in Independence on December 5, 1936. She had been a long distance operator for Bell Telephone prior to her marriage. She and George lived in Wayland, MO for most of their married life.

She was preceded in death by her parents and husband.

She spent her life as a homemaker. She and George farmed in Clark County for more than 60 years. They were faithful members of the Wayland United Methodist Church where she taught adult Sunday School classes and sang in the choir as well as in a quartet with Dave Shrauner, Mathew Eder, and Ruth Young. In addition, she served as secretary and later, treasurer of the church board. She was a member of Kahoka Chapter # 40, O.E.S. and would have received her 70th year pin in November. She also was a charter member of the Wayland Extension Club.

She loved to sew, do needlepoint and applique quilts. She was a gracious hostess to all she entertained and a loving mother, wife, grandmother and great-grandmother.

Memorial services were held Sunday, August 31, 2014 at 2 p.m. at the Wayland United Methodist Church with Pastors Nate Frazee and Barb Hagerla officiating. At her request, her earthly body was donated for medical research.

Family received friends following the service in the fellowship hall of the church.

Memorials are suggested to the Wayland United Methodist Church.

To send a flower arrangement to the family of Esther L. Sowers , please click here to visit our Sympathy Store.

To order memorial trees or send flowers to the family in memory of Esther Sowers, please visit our flower store.