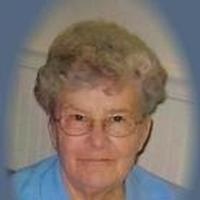 Esther was born October 30, 1934 at the family home north of Luray to Morris and Charlotte Weaver O'Brien.

She graduated from Luray High School in 1952 and on April 3, 1954 she married Joseph F. Kerr at the Luray Methodist Church. He preceded her in death on April 16, 2010. They lived and raised their family on their farm north of Luray until December of 2009.

She was preceded in death by her parents; her husband; a brother, Richard; and son-in-law, Henry Plenge.

Following her marriage, Esther worked a short period of time at the Kahoka Extension office before her children started arriving. When they were older she worked at Planned Parenthood and later was part-time Postmaster at Luray and drove the Oats Bus. First and foremost, she was a homemaker and farm wife.

She was a faithful member of the Luray United Methodist Church and the U.M.W. She held various offices in the church, was a Sunday School teacher for many years, and gave children rides in order that they might attend. She either organized or helped put together any activity going on in the church. Family and faith were the biggest part of her life and she instilled those values in her children.

Esther was a 4H leader for many years, specializing in gardening, sewing, and cooking. She had a huge garden and spent many hours caring for it and canning its' bounty. She always kept busy with a smile, whatever her activity, and stressed the importance of hard work with a much-used saying - "don't tell me you're bored". Esther also contributed a lot of time and work to the Wyaconda Lion's Club which Joe was very active in.

She had a loving, caring, heart and would tend to any injured creature brought to her home. She worked very hard for the American Cancer Society and she and Joe were well known at the local Relay, often leading the survivor's lap.

Memorials are suggested to the Combs Cemetery or NEMO Hospice.

To send a flower arrangement to the family of Esther F. Kerr , please click here to visit our Sympathy Store.

To order memorial trees or send flowers to the family in memory of Esther Kerr, please visit our flower store.