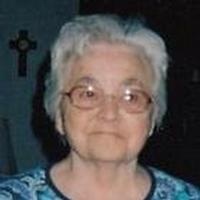 Esther was born November 9, 1925 at Columbus Junction, IA, a daughter of
Claude and Alta Lee Lukins.

She was preceded in death by her parents; her husband Thomas, on August 20, 1988; a daughter, Peggy Speck; a son, Jerry Evans; two sons-in-law, Joy Dale Speck and Butch Stahr; and two grandchildren, Chad Wallroff and Rhonda Evans.

Esther spent most of her life in Iowa until she and Thomas retired to Arkansas. She returned to Iowa for a period until her health declined and she moved to Kahoka to be near her daughter, Judee.

She spent most of her life as a homemaker and worked later in retail trade. Esther was of the Baptist faith, a former member of the Moose in Muscatine, and the Recycled Teenager Club in Arkansas, and enjoyed traveling and spending time with them. She enjoyed sewing and collecting Angels. She loved playing Bingo and the activities during her time spent at the RCF and Clark Co. Nursing Home. She also enjoyed a good joke and interacting with her son-in-law, Lyle, always poking her finger at him when he would walk into the room and tell them to call the police!

The family would like to thank all of the departments and staff at the Clark Co. Nursing Home and R.C.F. for their excellent care and love and kindness shown to Esther in the past seven years.

Cremation rites have been accorded at her request, and memorial services will be held Friday, February 1, 2013 at 1:30 p.m. at Wilson Funeral Home in Kahoka with inurnment at a later date in Rogers, AR.

Family will receive family one hour prior to services on Friday beginning at 12:30.

To send a flower arrangement to the family of Esther L. Evans , please click here to visit our Sympathy Store.

To order memorial trees or send flowers to the family in memory of Esther Evans, please visit our flower store.