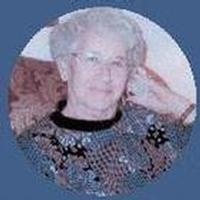 She was born August 6, 1923, at Williamstown, MO, the daughter of Henry Franklin and Jettie Mae Webster Brookhart.

She met Delbert E. Spray when they were both college students in Kirksville and he had just returned from World War II. Their first date was at a Barn Dance where his father was playing. They were married November 28, 1946, in Kirksville. They lived there two years while finishing school and the rest of their lives were spent in Clark County.

Erma graduated from Northeast Mo. State Teacher's College. She taught south of Williamstown, at Ballard, and then Wyaconda. The majority of her teaching career was spent in the Kahoka/Clark County School District where she taught typing and other business courses. She was also Junior Class sponsor and responsible for the Junior-Senior prom for many years. She taught over 35 years, retiring in 1987.

In 1972, she and Delbert started promoting bluegrass festivals, organizing the Kahoka Bluegrass Festival that same year. In 1978, she and Delbert formed the Tri-State Bluegrass Association. They attended and promoted many Bluegrass events and made hundreds of friends all over the country. Erma continued working on Bluegrass promotions until her health started declining in 2008. For 27 years she and Delbert organized the annual benefit show for the Clark Co. Rescue Squad and then the C.A.R.E. organizations. All proceeds were donated to sustain their local activities.

Erma was a member of the Kahoka United Methodist Church and the church Circle group. She enjoyed flowers, playing black jack, tending garden with Delbert, camping, going to Blue grass festivals, New Years eve parties at John Hartfords, and life on the farm. She dearly loved Delbert, her family and her Bluegrass work.

Funeral services were held Thursday, April 9, 2009, at 1 p.m. at Wilson Funeral Home with Pastor Shawn McAfee officiating. Live bluegrass music was performed beginning at noon in the funeral home lobby. Burial was in the Ballard Cemetery, southwest of Kahoka.

Memorials were suggested to the Delbert and Erma Spray Musical Scholarship which will be offered through the Clark County R-1 School District.

To order memorial trees or send flowers to the family in memory of Erma Spray, please visit our flower store.