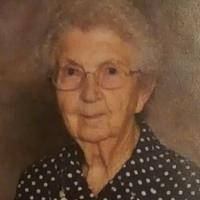 Eloise G. Bullerd, age 93, of Kahoka, MO, passed away Tuesday evening, October 4, 2016, while a patient at the Clark Co. Nursing Home in Kahoka.

Eloise was born July 17, 1923, a daughter of Henry and Mary Mohr Pohlmann.

Eloise graduated from Kahoka High School and attended college in Kirksville, studying business. Eloise drove a school bus for many years, beginning with Union School where she began with a station wagon before driving for the Clark Co. R-1 School District. In addition, she worked alongside her husband, Claude, taking care of livestock, cutting wood, and whatever was needed on the farm. Eloise worked hard and never took anything for granted, using whatever she could before discarding an item. She was lovingly referred to as "the egg lady" as she drove a weekly route of selling her hen’s eggs and visiting with her many customers. Not surprisingly, she was always the one to make noodles and chicken noodle soup for any event at St. Paul Church.

Eloise was a devoted and life-long member of the St. Paul United Church of Christ in Kahoka. During her lifetime, she spent many hours at the church doing things that needed done whether it was folding bulletins, helping prepare the church newsletter, and decorating the church sanctuary each fall. She also was part of the church quilting/sewing group. She was a long-time member of the church choir, head of the courtesy committee and Sunday School teacher for over 60 years. She had retired from teaching a year ago this month and an "Eloise" puppet, complete with chicken, was added as part of the Puppet Pal ministry at St. Paul. For many years Eloise also led the 4-5-6 club at the church. In addition, she delivered church newsletters and bulletins to the nursing home and to shut-ins.

She was a weekly volunteer at Black Hawk Elementary in the 4th grade class for many years and was a regular volunteer for bingo at the Clark Co. Nursing Home.

Memorials may be made to the St. Paul United Church of Christ Christian Education Fund or the Frazee Cemetery.

To order memorial trees or send flowers to the family in memory of Eloise Bullerd, please visit our flower store.