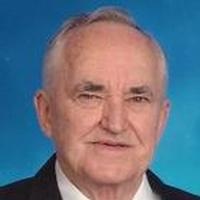 Elmer was born December 30, 1924 at Wayland, MO, a son of Fredrick and Rosa Sheverbush Buschling.

She preceded him in death on December 5, 2007, just nine days prior to their 55th wedding anniversary.

He was preceded in death by six brothers: one in infancy and Louis, Fred, John, Charles, and Allen and five infant sisters.

Elmer was a faithful, dedicated member of the St. Martha’s Catholic Church in Wayland.

He was also a Board Member of the Zion Cemetery. He graduated from Wayland High School in 1941 and served in the U. S. Army.

Elmer was a retired employee of Roquette. He also owned a small farm. From 1988 until 2004 he and his family operated Buschling Fireworks at their home south of Wayland on old highway 61.

Elmer enjoyed gardening and planting many beautiful flowers at his home. Anything he planted lived as it was lovingly cared for under his watchful eye. He was an excellent cook and made sure his children knew how to cook as well. Elmer loved being around people. He could make a few calls and soon his home would be filled with friends and neighbors and the eating and card playing would begin. He had a special knack for organizing and putting together family gatherings and reunions in order to maintain close family ties. He was the last of his generation of Buschlings.

A Mass of Christian Burial was held Wednesday, March 26, 2014 at 10 a.m. at St. Martha’s Catholic Church in Wayland with the Rev. Boniface Kasiita Nzabonimpa serving as officiant.

Burial with military honors followed in the Zion Cemetery southwest of Wayland.

Memorials are suggested to the Zion Cemetery or St. Martha’s Catholic Church.

To send a flower arrangement to the family of Elmer L. Buschling , please click here to visit our Sympathy Store.

To order memorial trees or send flowers to the family in memory of Elmer Buschling, please visit our flower store.