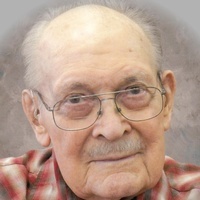 He was preceded in death by his wife; his parents; and a son, Mark Henry Vance.

Edward graduated from DeWitt High School and took several on-line classes through the University of Missouri. He farmed all of his life and retired at the age of 72 from his job as an employee of USDA. He was also a US Army Veteran.

Always involved in his community, Ed was a Revere School Board for a number of years, served on the Clark Co. Republican Committee, and on the University of Missouri Extension Council.

At his death, Ed was the oldest member of the Peaksville Christian Church and an Elder Emeritus (lifetime elder) having been unanimously elected by the church to be given this honor. He was instrumental in the 1990's to construct the Constitution and By-Laws for the church. He served several terms on the church board before retiring from it.

In earlier years he had belonged to rock clubs in both Farmington and Clark County and was always interested in geology. As a younger man, he enjoyed hunting, fishing, traveling and camping. He was always ready for a drive through the country to see familiar sites and discuss any farming related topic.

He was dedicated to God, his family and his country.

Funeral services were held Friday, May 24, 2019 at 10 a.m. at Peaksville Christian Church with Pastor Shawn McAfee officiating. Burial with Military Rites followed in the Revere Cemetery.

Memorials are suggested to the Peaksville Christian Church or the Revere Cemetery.

To send a flower arrangement to the family of Edward K. Vance , please click here to visit our Sympathy Store.

Friends may call after 2 p.m. with family receiving friends from 6-8 p.m.

Friends may call after 2 p.m. with family receiving friends from 6-8 p.m.

To order memorial trees or send flowers to the family in memory of Edward Vance, please visit our flower store.