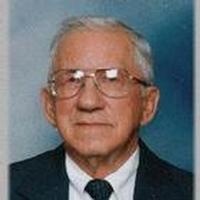 Earl Roland Moughler, age 82, of Kahoka, MO, passed away Friday, April 20, 2012 at the Clark Co. Nursing Home in Kahoka after a short battle with cancer.

Earl was born November 21, 1929, in Davis County, Iowa, a son of Marion and Mattie Conner Moughler.

He is survived by his wife of 58 years, E. Lois Archer Moughler of Kahoka, MO; three

He was preceded in death by his parents; brother-in-law, Laddie Archer; and, sisters-in-law, Willadean Archer and Madeline Moughler.

Earl was a 1947 graduate of Troy High School, Troy, IA. During his teen years he worked for Troy Elevator until entering the U. S. Army in October of 1951. During his military career he served in Korea for 16 months. Following his discharge, he returned to Troy and continued working for the elevator until he went to work for Kaser Corporation. He moved his family to Kahoka in 1968 to manage several quarries in Iowa and Missouri. He retired from Kaser's in 1995 after working there 41 Â½ years. Following retirement he worked for the Exchange Bank of Kahoka, Hometown Journal and Clark Co. Road and Bridge.

Earl had served on the Kahoka City Council, the Clark Co. Fair Board and the Kahoka Senior Housing Board. He was a 50 year Mason and 50 year Eastern Star. He was a member of St. Francisville Lodge # 588, A.F. & A.M. and Kahoka Chapter # 40, O.E.S.

Earl believed in doing a job well and you knew you had when he said good job. He enjoyed gardening, making his yard look perfect and in keeping his vehicles nice and clean. Most of all, he treasured his family.

Funeral services were held Monday, April 23, 2012 at 10:30 a.m. at Wilson Funeral Home in Kahoka with Pastor Shawn McAfee officiating. Burial and military rites was in the Kahoka Cemetery.

To order memorial trees or send flowers to the family in memory of Earl Moughler, please visit our flower store.