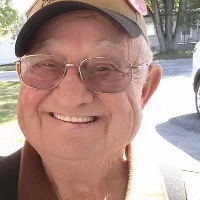 Ernest Kieth Courtney, age 83, of Wayland, MO, passed away on Friday, June 28, 2019 at his home surrounded by his family.

He was born October 17, 1935 at his families home in Revere, a son of Oval and Loa "Mickey" Hardy Courtney. They divorced and she married Richard James who he lovingly referred to as his "father".

On June 18, 1955, he was united in marriage to Doris J. Price and they had just celebrated their 64th anniversary.

He was preceded in death by his parents; a son, Roger; two sisters, Barbara Snider and Bonnie Jo James in infancy; brother-in-law, Bill Yates; and a sister-in-law, Darlene Manary.

Kieth was a graduate of Granger High School. He was the last telegraph operator for Burlington Northern Railroad in Keokuk, retiring after 43 years.

Kieth served his community well. He helped organize the Running Fox PTO when the school opened in 1968. He saw the need for an improved fire department and was instrumental in seeing that through to the present day where it meets all modern standards and requirements. He and Doris were also very active in the Clark Co. Mule Festival committee, serving in many ways.

Kieth instilled in each of his children from the very beginning the importance of faith. He taught it and lived it as an example to each of them. He read his Bible at least twice a year and loved to quote appropriate scripture to almost any situation. Along with that, he was willing to lend a helping hand to anyone, no matter what the need. He was a faithful member of the First Baptist Church in Wayland.

He collected toy fire trucks, loved to garden, and read westerns. If it was broken, you didn’t toss aside, he had a knack to "jerry-rig" anything that was broken. He also had an analytical mind that could figure out anything.

Kieth had a special love for the Rocky Mountains and for doing things for the fire department. He also loved morning coffee with his friends at the local restaurant. More than anything was his special love for his family.

Graveside services were held Monday, July 1, 2019 at 10:30 a.m. at the Kahoka Cemetery with Rev. Dan Deatrick officiating with inurnment following.

Memorials are suggested to the Clark Co. Mule Festival or the Wayland Fire Department First Responders.

To send a flower arrangement to the family of E. Kieth Courtney , please click here to visit our Sympathy Store.

To order memorial trees or send flowers to the family in memory of E. Courtney, please visit our flower store.