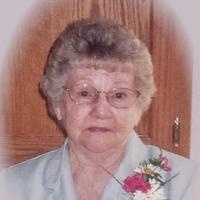 Dorothy attended school in the Deer Ridge area. She worked side by side with her husband on the farm all of their married life. She loved being outdoors and loved putting in a garden. She worked in the Country Pizza Wagon owned by her son Mike and daughter-in-law, Cathy, and also at the Scotland County Memorial Hospital.

Dorothy was of the Baptist faith. She loved cooking for her family and having them around her table and filling up her home. She was famous for her homemade pies and noodles. She crocheted and quilted and was an avid Cardinal’s fan.

Memorials are suggested to Camp Leeper or Industrial Opportunities.

Friends may call at Wilson Funeral Home after 9 am. Wednesday with family receiving friends from 6-8 p.m.

Friends may call at Wilson Funeral Home after 9 am. Wednesday with family receiving friends from 6-8 p.m.

To order memorial trees or send flowers to the family in memory of Dorothy Webster, please visit our flower store.