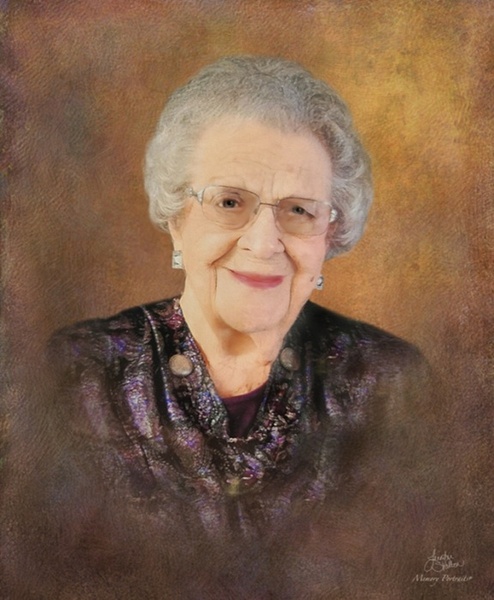 Dorothy A. Bertram, 95, of Kahoka and formerly of rural Gorin, passed away peacefully at 1:00 am on Thursday, December 31, 2020, at the Clark County Nursing Home in Kahoka, with loved ones at her side.

She was born on October 10, 1925 at the family home near Fairmont, the daughter of the late Ralph E. and Tessie A. (Vollmer) Jenkins. She was a 1943 graduate of Wyaconda High School. Dorothy married Harold S. Bertram on September 18, 1947, in Hannibal, Missouri, and he passed away unexpectedly on March 15, 1982.

Dorothy was a farm wife for most of her life. She worked as a salesperson for Newton Mfg. Company which focused on advertising specialties for thirty plus years. Dorothy also sold World Book Encyclopedias for a time as well. In her early years, after attending Northeast Missouri State Teachers College for one year, she worked at a gas company and at Laughlin Hospital as a secretary, both in Kirksville.

Mrs. Bertram was a member of Fairmont Methodist Church, later becoming a member of St. Paul United Church of Christ in Kahoka. She was an avid traveler and had visited all fifty states on several trips in the United States and abroad along with her travelling companion and cousin-in-law, Mary Louise Jenkins. Most trips resulted in a scrapbook filled with memories that she loved revisiting over the years. She was a former 4-H club leader along with being a project leader in foods and crafts. Most people in the Wyaconda area had sampled one of Dorothy’s homemade doughnuts during the Wyaconda Jr. High Basketball Tournament in the 1960’s. She also enjoyed making crafts and attending craft shows selling her goodies. Dorothy loved to play cards and games and time spent with her card club ladies. In addition, reading was another favored pastime, and she counted on the Seaver Library to keep her supplied with books. She loved her family and cherished every moment spent with them. Dorothy enjoyed attending her grandchildren’s activities and was one of their biggest fans. Her grandchildren and great grandchildren were the highlight of her life.

Funeral services honoring the life of Dorothy were conducted at 1:00 pm on Tuesday, January 5, 2021 at the Wilson & Triplett Funeral Home in Kahoka. Reverend Daniel Moore officiated. Entombment followed at Wyaconda Cemetery. A visitation will be held on Tuesday at 11:00 am until the time of services at the funeral home. Dorothy’s family would like to extend a heartfelt thanks to the staff at Clark County Nursing Home for their care and friendship for nearly nine years. Memorial contributions in memory of Dorothy were suggested to Wyaconda Cemetery or to the Clark County Nursing Home’s Activity Fund. You are invited to share your memories of Dorothy and leave a condolence at www.wilsontriplett.com

To order memorial trees or send flowers to the family in memory of Dorothy Bertram, please visit our flower store.