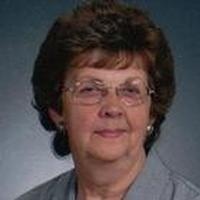 Doris Annetta Spence, age 76, of Kakoka, Missouri, passed away on Monday, November 17, 2014 at University Hospital in Columbia, Missouri from complications related to leukemia.

She was born June 3, 1938 in Clark County, the daughter of Thomas Michael and Luttie Frances (Schmid) Dunning and grew up on the family farm south of Kahoka.

She was united in marriage to Guy Earl Spence on October 3, 1964 at St. Michael's Catholic Church in Kahoka, Missouri. With this union came Guy's children Kevin and Karma. The family later grew as Kris, Kay, Kathy, and Kraig were born. Guy and Doris were blessed to observe their 50th wedding anniversary in October.

After graduating from Kahoka High School in 1956, Doris worked at W. A. Sheaffer Pen in Fort Madison, Iowa, until marrying Guy. She then dedicated her life to being a housewife and loving mother and grandmother. From 1982 - 2006 she also cared for other people's children before and after school, or during the school hours for pre-K children, in her home. Her grandchild, Brynn, was the last full-time child she cared for.

Doris was a member of St. Michael's Catholic Church in Kahoka and a member of the Rosary Altar Society. During the years her children were in school, she was an active member of Fine Arts Boosters, chaperoning many band trips. She was an active supporter of the American Cancer Society's local Relay for Life.

A Mass of Christian Burial was held Saturday, November 22, 2014 at 10 a.m. at St. Michael's Catholic Church in Kahoka with burial following in the Kahoka Cemetery.

Friends called at Wilson Funeral Home in Kahoka after 9 a.m. Friday with family receiving friends from 5-7 p.m. The Rosary followed.

Memorials are suggested to St. Michael's Rosary Altar Society or to the American Cancer Society for the Clark Co. Nursing Home Relay for Life Team.

To send a flower arrangement to the family of Doris A. Spence , please click here to visit our Sympathy Store.

To order memorial trees or send flowers to the family in memory of Doris Spence, please visit our flower store.