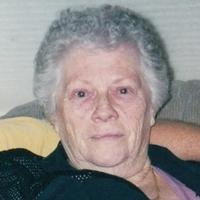 Dora was born October 9, 1932 in Bell River, IL, a daughter of Lyle and Beatrice Page McCoy.

She was preceded in death by her parents; her husband; one brother, Earl Edward McCoy; and brother-in-law, Jim Hines.

Dora and Clinton raised their children in Iowa where he was an Iowa State Patrolman and she was homemaker for their busy household. They moved to Missouri following his retirement and then moved to southern Illinois where she was a member of the Emmanuel Baptist Church in Benton, IL and an active Redhatter in Mt. Vernon. Following Clinton’s death, she returned to Missouri and resided with her daughters’ family in Luray.

Dora was an accomplished seamstress and avid quilter. She loved listening to music and in earlier days was active in her church and baked for every event she could. Her faith and her family were very important to her.

Inurnment will be on Monday, January 30, 2017 at the County Line Cemetery at Thompsonville, IL under the direction of Charlie McClintock.

There will be no other visitation.

Memorials are suggested to the family and checks may be made to Carolyn Branson.

To order memorial trees or send flowers to the family in memory of Dora McClintock, please visit our flower store.