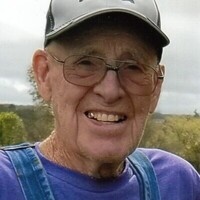 Don was born October 9, 1928 at Windyville, MO, a son of Floyd and Essie Wilson Harris.

He graduated from Buffalo High School in 1946 and in 1953 received his bachelor’s degree from Ozark Christian College in Joplin, MO. It was there that he met Dorothy St. Clair.

They were united in marriage on December 30, 1953 in the Kahoka Christian Church. Dorothy preceded him in death on January 28, 2003.

He is survived by his daughter, Teresa (Albert) Ludwig of Wayland, MO; brother-in-law and sister-in-law, Edward and Annetta St. Clair of Portland, OR; nieces, nephews, cousins, and other relatives.

In addition to his wife, Dorothy, he was also preceded in death by his parents; seven siblings: Axine and Marine, Florence, Margeree, Irvin, Dale and Jessie John.

Following his marriage, Don supplied preaching for a number of years while working various jobs. Being country bred, he loved the farm and spent the rest of his life doing just that along with truck driving, including for MFA, as well as doing maintenace work for Ball Fertilizer.

His spiritual life was very important to him and he tried to live his life as an example of Christian living. He and Dorothy loved children, but unable to have their own, they planned to do foster parenting. That didn't materialize as planned and by 1967 they were the proud parents of a little girl of their own who they loved and cherished.

After losing Dorothy, he became a foster grandpa for Shiloh Children’s Ranch. They became his life support. He faithfully attended and supported as a member the Neeper Christian Church. Caring for the church as well as maintaining the cemetery by mowing and keeping clean, was part of his ministry. At the time the recent church was built, he took the old windows and trimmed them down to fit the new windows, a long, tedious job.

Don loved to donate his blood to the blood mobile, often helping load and unload and anything else they might need help with. He loved doing 5k walks and researching genealogy.

Private graveside services for Don were held Monday, April 20, 2020 at 11:00 a.m. in the Neeper Cemetery. Officiating was his nephew, Pastor Jay St. Clair.

A visitation was held at Wilson Funeral Home in Kahoka between the hours of 9 a.m. and 10:30 on Monday.

Memorials could made to the Neeper Cemetery or the Shiloh Christian Children’s Home.

To send a flower arrangement to the family of Donald G. Harris , please click here to visit our Sympathy Store.

To order memorial trees or send flowers to the family in memory of Donald Harris, please visit our flower store.