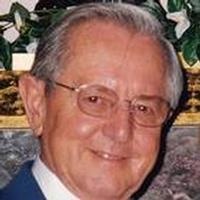 Donald was born August 9, 1931 in Kahoka, MO, a son of Herbert and Bertha Hess Dinger.

He was united in marriage to Limjke (Linda) Hogeboom on June 14, 1958 at Wyandotte, MI.

He was preceded death by his parents and siblings: Mary Pasiuk, Amy Dinger, and Betty (Gerald) Denham.

Don was a 1948 graduate of Kahoka High School. He earned a Bachelor's Degree in Agriculture from the University of Missouri and then served in the U.S. Navy. He received a Master's Degree in Hospital Administration from Washington University in St. Louis. He spent his career in administration.

Don and Linda returned to Missouri when his health began to fail to be near his extended family in Clark County.

Don was a member and confirmed in the St. Paul United Church of Christ in Kahoka.

Friends called at St. Paul United Church of Christ on Tuesday beginning at 1 p.m. with family receiving friends until time of services.

Memorials in lieu of flowers are suggested to St. Paul United Church of Christ.

The family is being served by Wilson Funeral Home.

To send a flower arrangement to the family of Donald H. Dinger , please click here to visit our Sympathy Store.

To order memorial trees or send flowers to the family in memory of Donald Dinger, please visit our flower store.