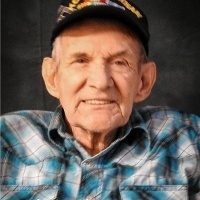 Donald was born September 21, 1930 in Muscatine, IA, the son of Rolla and Blanche Templeton Albright.

He was preceded in death by his parents, a sister Lorraine Haven, and niece, Sherry Monical.

Donald attended school in Farmington. He spent 14 years serving his country in the

United States Marine Corps. He then sold insurance and following his retirement spent his time working on old cars and selling car parts. He enjoyed going to Rutledge each year and visiting the people that attended.

Graveside services and military rites were held Friday, August 16, 2019 at 10:30 a.m. at the Wyaconda Cemetery with Pastor Carroll Davenport officiating.

There was not a visitation.

To send a flower arrangement to the family of Donald Eugene Albright , please click here to visit our Sympathy Store.

Graveside and Military Honors will be observed.

Graveside and Military Honors will be observed.

To order memorial trees or send flowers to the family in memory of Donald Albright, please visit our flower store.