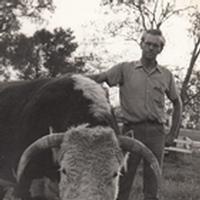 David was born on August 20, 1928 at the family home in rural Wyaconda, MO, the son of Loyd and Ruth Barber St. Clair. He attended Wyaconda High School and graduated in the Class of 1946. He married Wilma Colvin on November 23, 1950, at the home of Rev. Ivan Cull in rural Williamstown.

At the age of 9, David accepted Jesus as his Savior at the New Woodville Baptist Church and was baptized south of Ballard in Lester Moore's pond.

David was an insurance agent for 52 years as well as a carpenter and farmer. When REA came to the area he and his father did the wiring for many rural residents in the Northeast Missouri area. He loved Hereford cattle, Farmall/International tractors, and spending time at the farm and with his family.

Funeral services were held Monday, November 16, 2015 at 11 a.m. at Wilson Funeral Home in Kahoka with Pastor Frank Whitney officiating assisted by Pastor Dean Tomlinson. Special music was provided by Renee Anderson playing "The Old Rugged Cross". Other music included "This Old House" and "On The Wings Of A Dove".

Memorials are suggested to the New Woodville Cemetery Association.

To order memorial trees or send flowers to the family in memory of David Clair, please visit our flower store.