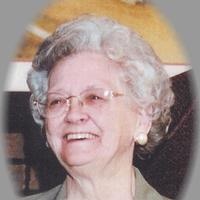 Darlene was born January 22, 1933 at her parent’s home in Wyaconda, a daughter of Martin C. and Wilma Clough Hines.

She was preceded in death by her husband; her parents; a granddaughter, Mindy Humes; a sister, Willa Kearns; a brother, Bill Hines; brothers-in-law, Gerard Grogan, Donald Kearns, LaVerne Humes, A. J. Humes, and Robert Varnold.

Darlene was a 1951 graduate of Wyaconda High School and of Kirksville College of Cosmetology.

She owned Dar’s House of Beauty in Wyaconda, which her husband built for her in 1968. It was located next door to her dad’s business, Hines Barber Shop. She sold her business in 1973. Later she began working as a bookkeeper for the NEMO Library Board. Darlene was an elk producer alongside her husband, Alfred, and was very involved with getting elk domesticated in the State of Missouri.

loved to crochet and was a wonderful cook. She took pride in her appearance and was always ready to go at a moment’s notice. She made sure her work was done before lunch so she could watch her favorite Soap Opera, "As The World Turns". Darlene was a loving mother and grandmother and as her great granddaughter said "she gave good hugs".

Funeral services will be Saturday, May 13, 2017 at 10 a.m. at Wilson Funeral Home in Kahoka with Pastor Paul Harvey officiating. Burial will follow in the Wyaconda Cemetery.

Memorials are suggested to Wyaconda Firefighter’s Assn. or Hospice of Northeast Missouri.

To order memorial trees or send flowers to the family in memory of Darlene Humes, please visit our flower store.