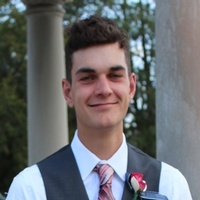 Damon was born February 27, 2000 in Keokuk, IA, a son of Craig and Sarah Wright Krogmeier.

Damon was home schooled, having graduated in 2017.

He was preceded in death by his paternal grandparents, Leroy and LaVonne Krogmeier; a brother, Jesse, in infancy; and a stillborn sister, Lourdes.

Damon was a self-employed construction worker, working with and driving Amish crews. He had been a hard worker from the time he was a little boy and loved working with his hands. He was a faithful worker as well and would never quit on a job. He was intelligent and if he couldn’t figure something out, he looked or worked until he did.

Damon was of the Catholic faith. He had a deep respect for his faith and attended mass with his family. He was a loving son, brother, and proud uncle. He had a wicked grin that he could infuriate you with or melt your heart. He loved animals and Luke said he was an "animal whisperer". The best gift you could give him was your time.

Damon made friends very easily. He never met a stranger and lived fully every minute of every day. He was extremely positive and couldn’t hold a grudge. He was a wonderful friend to everyone and would help anyone anytime or anywhere.

A Mass of Christian Burial was held Thursday, January 10, 2019 at 1 p.m. at All Saints Catholic Church in Keokuk with burial in Sacred Heart Cemetery in Fort Madison, IA.

To send a flower arrangement to the family of Damon M. Krogmeier , please click here to visit our Sympathy Store.

Friends may call at Wilson Funeral Home after 9 a.m. Wednesday with family receiving friends from 5-8 p.m. followed by the Rosary.

Friends may call at Wilson Funeral Home after 9 a.m. Wednesday with family receiving friends from 5-8 p.m. followed by the Rosary.

To order memorial trees or send flowers to the family in memory of Damon Krogmeier, please visit our flower store.