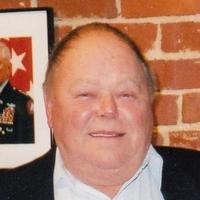 Clifford was born August 10, 1940, in New Boston, MO, a son of Roy and Dorothy Riedel Pamperl.

He was united in marriage to Mary Dieterich Shaul on April 3, 1986 in Leavenworth, KS.

He was preceded in death by his parents; a brother; a sister; two sisters-in-law; two nieces; his grandparents; father-in-law and step father-in-law.

Clifford graduated from High School in New Boston and worked at Besel’s Heating and Air Conditioning in Leavenworth. He and Mary had recently moved to Kahoka. He was of the Baptist faith.

Clifford enjoyed fishing, watching Nascar races and playing with his dogs. He also enjoyed a good game of cards with family and friends and going to the casino. He and his family spent weekends for ten years at Piper Lake and this time was very special to him. His favorite past time was spent with his family.

Memorial services were held Thursday, October 20, 2016 at 11:00 a.m. at Wilson Funeral Home in Kahoka, MO, with Rev. Ted Middleton officiating. Recorded musical selections included: "When I'm Gone" and " I Want To Stroll Over Heaven With You". Inurnment will be at a later date.

Friends called at Wilson Funeral Home after 9 a.m. Thursday with family receiving friends from 9:30 a.m. until time of services at 11.

Memorials are suggested to the donor’s choice.

Friends may call at Wilson Funeral Home after 9 a.m. Thursday with family receiving friends from 9:30 a.m. until service at 11:00 a.m.

Friends may call at Wilson Funeral Home after 9 a.m. Thursday with family receiving friends from 9:30 a.m. until service at 11:00 a.m.

To order memorial trees or send flowers to the family in memory of Clifford Pamperl, please visit our flower store.