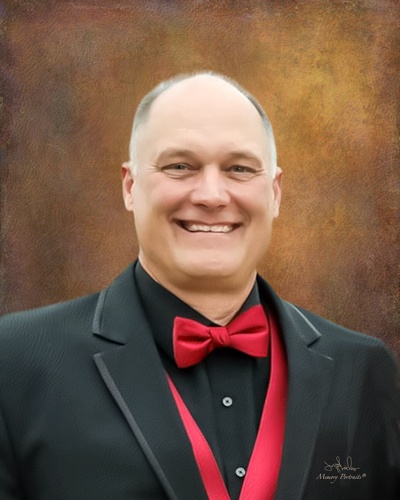 Christopher Lynn Nichols, 52, of Williamstown, passed away unexpectedly at 10:50 am on Sunday, September 19, 2021 at his home.
He was born on January 17, 1969, in Kirksville, the son of Ralph and Sandi (Brown) Nichols. Chris married Tonja Earnhart on July 5, 2008 at his parent’s house in Williamstown and she survives.
Chris graduated from Clark County R 1 High School in 1987. He was a farmer and enjoyed doing farm work. In previous years he had worked for the Langenbach Sawmill in Fort Madison and at Prairieland FS, Inc. in Kahoka for several years. When Chris wasn’t working, he enjoyed fishing, hunting and golf.  He liked late model racing cars. Chris was a family man who enjoyed spending time with his family; especially his grandchildren.
In addition to his wife, Tonja, and his parents; Ralph and Sandi Nichols of Williamstown, Chris is survived by two sons; Cordero Nichols of Gilbert, Arizona and Devon Galvan of Knoxville, Iowa, four daughters; Stephanie Janes of Bolivar, Melissa (Ben) Anderson of Pleasant Hill, Charissa Galvan of Waterloo, Iowa and Brianna (Bradley) Baker of Wever, Iowa, ten grandchildren; Lyla and Bethanie Janes, Asher and Ever Anderson, Zayne Galvan, Kinzleigh Hildreth, Holdyn, Keegan, Annabelle and Ryleigh Galvan and a forthcoming grandchild expected in April of 2022, a brother; Ted (Deanna) Nichols of Wentzville, a sister; Victoria (Shawn) Schorr of Mapleton, Illinois, an aunt; Karen Bradshaw of Williamstown and by several nieces, nephews, cousins and good friends. Chris was preceded in death by his grandparents, Reuben and Viva Belle Nichols and L.E. and Mildred Brown, his father and mother in-law; Dale and Betty Earnhart, uncles; L.E. Brown Jr., Richard Brown, Weldon Brown, Lawrence Nichols and Harold Nichols and by an aunt; Sarah Smallwood.
Funeral services honoring the life of Chris were conducted at 10:30 am on Saturday, September 25, 2021, at the Wilson & Triplett Funeral Home in Kahoka. Bro. Matt Gutting officiated the service. Interment followed at Williamstown Cemetery. A visitation was held from 4:00 until 7:00 pm on Friday at the funeral home and then again on Saturday from 9:30 am until the time of services. Memorial contributions in Chris’s memory were suggested to the family. You are invited to share your memories of Chris and leave a condolence at www.wilsontriplett.com
To order memorial trees or send flowers to the family in memory of Christopher Nichols, please visit our flower store.