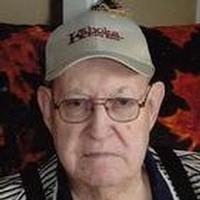 Charles was a veteran of the U.S. Navy, serving during the Korean conflict. He was a retired employee of the Keokuk Area Hospital.

He loved old western movies and the tv series, MASH. He loved going to the casinos and having coffee and breakfast at the local restaurants and visiting with his many friends.

Funeral services will be held Tuesday, December 31, 2013, at 1:00 p.m. at Wilson Funeral Home in Kahoka with Rev. William S. Mitchell officiating. Burial with military rites will follow in the National Cemetery in Keokuk.

Friends may call at Wilson Funeral Home after 9 a.m. Tuesday with family receiving friends from noon until time of services.

Memorials are suggested to the Kahoka Lion's Club or the K.A.H. Auxiliary.

To send a flower arrangement to the family of Charles J. Rampley , please click here to visit our Sympathy Store.

To order memorial trees or send flowers to the family in memory of Charles Rampley, please visit our flower store.