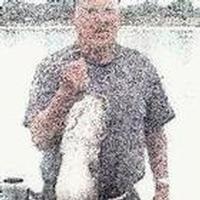 Carroll was born June 13, 1926 near Greentop, MO, a son of Clyde and Remah Bachman Whiteaker.

Carroll and Virginia Speake were united in marriage on October 18, 1952 at Pocahontas, AR.

Survivors include his wife, Virginia, of the home; his children: Beverly (Mrs. Mark)

He was preceded in death by his parents; a brother, Gary Whiteaker; and brothers-in-law Charles Mert Rosencrans, Dean Edmondson, and Glenn Haage.

Carroll attended school in Milan and then in Kahoka until being drafted to the Navy and then being transferred to the Army. He was an electrician at the former Shellor Globe in Keokuk, retiring after 25 years of employment. He loved to camp and in earlier days, hunt. He was known for raising a variety of hunting dogs and enjoyed spending time out doors mowing.

His main entertainment came from fishing. He loved to fish each and every day he could and was known as Bass Man on his CB. Carroll dearly loved his family and spending time with them.

At Carrolls request, cremation rights have been accorded. There will be no visitation or services.

Memorials may be made to the Clark Co. Ambulance District or the Kahoka Cemetery.

To order memorial trees or send flowers to the family in memory of Carroll Whiteaker, please visit our flower store.