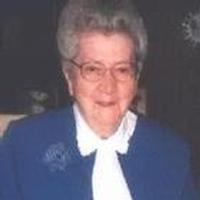 She was born on August 21, 1927 east of Edina, MO, one of seven children to Floyd and Elizabeth Stephens Eoff.

Betty received her education in Knox County, graduating from the Knox City High School in 1945. After receiving a teachers certificate from the Northeast Missouri State Teachers College in Kirksville, MO, she taught at the Jeddo rural school south of Knox City and the Island rural school north of Knox City, MO.

She married Paul O'Neal Jr. On April 17, 1947. She and Paul were the parents of three children. Betty married Fred Webster on November 21, 1973. They had celebrated 37 years of marriage.

She was preceded in death by her parents; three brothers, Donald, Glenn, and Charles Eoff; two sisters, Norma Eoff and Emma Lou Williams; and a brother-in-law, Harold Foglesong.

Following her school teacher years, Betty was a cook at the Wyaconda High School for 1 year before starting work at the Morgan Oil Co. in Wyaconda where she was employed for 16 years. She then went to work at Motorola, Inc, at Quincy, IL and from there worked at the National Garment Factory in Memphis, MO. She returned to the Wyaconda High School as a cook for six more years before retiring in 1988 due to health reasons.

She loved spending time with her children, grandchildren, and great-grandchildren. Fred and Betty loved to travel and were able to see various areas of the country together while visiting family and friends. She enjoyed reading books, putting picture puzzles together, playing cards and board games and was well known for her homemade hot rolls or "biscuits" as Fred called them and taught Fred how to make them also.

Betty was a faithful member of a non-denominational church and also enjoyed attending the Bible Baptist Church in Kahoka. She enjoyed the fellowship at the Clark County Senior Center and never met a stranger. Her sweet smile will be missed by all who knew her.

Funeral services will be held Wednesday, April 20, 2011, at 1 p.m. at Wilson Funeral Home in Kahoka with Robert Eberhardt, Tom Davis and Pastor Glen Yoder officiating. Burial will follow in the Wyaconda Cemetery.

Memorials are suggested to the Clark Co. Senior Center.

To order memorial trees or send flowers to the family in memory of Betty Webster, please visit our flower store.