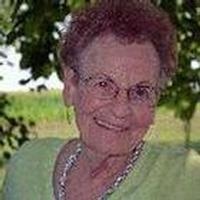 She was preceded in death by her husband, Lowell D. Jackson; her parents; brothers, Ermin, Bobby, Calvin, Enoch and Tommy Saulsbury; and sisters, Edna and Patsy Saulsbury and Esther (Saulsbury) Chenoweth.

Betty graduated from Lancaster High School in 1950. She played softball and basketball. While in school she worked in a cafÃ© and grocery store.

Betty and Lowell moved to Kahoka in 1952. She worked for Kahoka Cheese Factory as a cheese tester and later as the secretary at Ayers Oil Company for Daryll Calvert. Betty was a dedicated dietary employee of the Clark Co. Nursing Home for 31 Â½ years. She retired from there at age 79 and continued to be active through volunteering both at the Nursing Home and the Nutrition Center.

For over twenty years Betty and Lowell owned and ran Jackson Floor and Wall Shop in Kahoka.

Betty was a devoted member of the Kahoka Christian Church and especially enjoyed the fellowship with other members and the hymn sings. She and Lowell were members of the NEMO Indians Camping Club and loved to camp and spend time with friends.

Betty came from a big family and loved getting together every year at family reunions. She loved to dance and you could find her doing a jig whenever she heard a tune. Blitz (card game) was played often at gatherings. Her grandkids loved playing this game with her. Seeing and being with her family meant the world to her.

Betty was a past Noble Grand of the Kahoka Rebekah Lodge.

She was a devoted Clark County Indian Fan, attending as many basketball games as possible. The Marching Indians were a favorite too.

Betty and Lowell enjoyed meeting up with friends at the local restaurants. They were very proud when they were selected in 2006 to be Grand Marshals of the Old Settlers Parade.

Betty stated that her best memories in life were the birth of her three girls, her grandchildren and her great-grandchildren. When she was together with her family, it was always a good day and she couldnt get enough of it.

Funeral services were held Saturday, October 6, 2012, at 10 a.m. at the Kahoka Christian Church with Rev Jim Campbell officiating. Burial was in the Kahoka Cemetery.

Memorials were suggested to the Kahoka Christian Church.

To order memorial trees or send flowers to the family in memory of Betty Jackson, please visit our flower store.