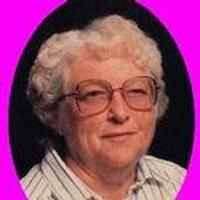 Betty was born April 4, 1933 in Keokuk, IA, a daughter of Earl Floyd and Ruby Peterson Loter.

She was preceded in death by her parents; her husband; two brothers, Floyd and Bill Loter; a sister, Berniece Welch; and grandson, Albert Eugene Woodsmall.

Betty attended school in Keokuk. She had worked at Motorola and Swift and Co. until both closed and the majority of her life was spent as a homemaker. Betty was a long-time member of the First Christian Church in Keokuk. She enjoyed her life at home in the country watching birds and animals and attending Flea Markets around the area. She loved spending time with her family and visiting with friends and neighbors.

Funeral services were held Monday, July 23, 2012 at 10 a.m. at Wilson Funeral Home in Kahoka with Rev. Dan Deatrick officiating. Burial was in the Frazee Cemetery.

To order memorial trees or send flowers to the family in memory of Betty Eder, please visit our flower store.