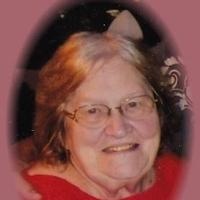 Bessie was born December 27, 1937 in Kinderhoook, IL, a daughter of Ellis and Beulah Holdren Spann.

She married Bill Conger, Sr. and they were the parents of one son, Bill. She later married James C. Martin in LaGrange, MO. He preceded her in death in 1980.

Bessie moved to Kahoka in 1997 to work at the then new Clark County Jail as a cook, retiring in the spring of 2016. She made many friends there including prisoners whom she tended to be a second mom to. She was a member of the Kahoka Christian Church and of the Randy McDaniel Relay for Life Team. In September she had moved to Carbondale, IL to be near T. J. and his family.

Bessie never knew a stranger and was happy whenever she had someone to brag to about her grandchildren. She was a member of "Cookie’s Coffee Club" and could be found there daily visiting with friends. Bessie’s greatest accomplishment of which she was very proud of, was raising her two sons alone with both turning out to be fine young men.

Funeral services celebrating her life will be held Tuesday, November 29, 2016 at 11 a.m. at Wilson Funeral Home in Kahoka with Rev. Jim Campbell officiating. Burial will follow at 3 p.m. at Evergreen Cemetery in Camp Point, IL.

To order memorial trees or send flowers to the family in memory of Bessie Martin, please visit our flower store.