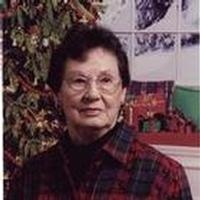 Beatrice was born October 31, 1922 near Luray, MO, a daughter of Howard and Myrtle Johnson Teter.

She married Claude Palmer and they were the parents of three daughters, Teresa, Cheryl, and Sharon. She later married Raymond Watson who preceded her in death.

She was preceded in death by her parents; her husband, Raymond Watson; and daughter, Sharon Cluney.

Bea attended school in Granger. She worked a period of time at Swift and Co. and retired from Sheller Globe.

Funeral services were held Friday, December 21, 2012 at 1 p.m. at Wilson Funeral Home in Kahoka with Pastor Randy Langner officiating. Special music was recordings "Everything I Do, I Do it For You" and "I Won't Let Go".

Burial was in the Combs Cemetery at Luray.

Visitation was held at Wilson Funeral Home after 9 a.m. Wednesday with family receiving friends from 6-8 p.m.

Memorials were suggested to the Combs Cemetery.

To send a flower arrangement to the family of Beatrice E. Watson , please click here to visit our Sympathy Store.

To order memorial trees or send flowers to the family in memory of Beatrice Watson, please visit our flower store.