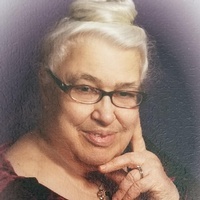 Barbara was born October 31, 1934 in Omaha, NE, a daughter of Foster and Edna Schee Try.

She was preceded in death by her parents and in-laws.

Barbara graduated from high school in Joliet, IL and received a music degree from Drake University and further study in writing at the University of Iowa.

She and Myron purchased their first home in Baxter, IA. While there, Barbara correlated the writing of five women’s information into a published book about the history of Baxter. She took this responsibility seriously and was blessed with the ability to write so not to personally offend the living or those who had already gone to Jesus, at the same time being factual in the history.

She was a marvelous, accomplished organist. She served as associate organist at the Immanuel Lutheran Church and assistant organist at the Disciples of Christ Church, both in Osceola. Believing this money belonged to the Lord, Barbara supported various missions from those salaried positions.

They retired to Missouri and built their home on land which had been in Barbara’s family. She was able to pass away there with the love and assistance from her husband and son, Dave.

Barbara and Myron always endeavored to serve God in whatever they were involved in.

She stood up for what she believed, always using wisdom from God and giving Him the glory.

She was a member of Living Waters Assembly of God Church in Keokuk and she and Myron were team leaders of the "Reach Ministry" of the church whose purpose was to reach outside of the church walls as a mission to others. When she was physically able, Barbara selected the hymns to be used in the ministry whose current mission is River Hills in Keokuk and the Clark Co. Nursing Home in Kahoka.

It was important to Barbara to "pray about it before you say it" in order that she would use the right words in a way that honored and served Him.. She would want her celebration of life and memory to show forth the Glory of Jesus Christ.

Family received friends on Wednesday at the Living Waters church from 10 a.m. until time of services.

Memorials are suggested to the Living Waters Assembly of God, Keokuk.

To send a flower arrangement to the family of Barbara P. Swan , please click here to visit our Sympathy Store.

To order memorial trees or send flowers to the family in memory of Barbara Swan, please visit our flower store.