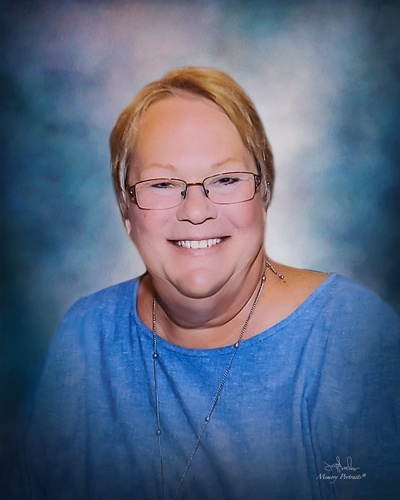 Anita was born February 17, 1962, in Keokuk, IA, the youngest child of the late Lester and Virginia (Kuntz) Acklie. Anita was raised on the family farm where she developed a love for animals, especially horses. She was a 1980 graduate of Clark County R-1 High School. On October 17, 1981, she was united in marriage with Timothy Wayne Gray at St. Paul United Church of Christ in Kahoka, MO.

In her youth, Anita was active in many school activities, member of St. Paul Youth Group and Choir, and the Ashton Cloverleaf 4-H Club. She was also Clark County R-1 High School’s first & only mounted Indian Football Mascot riding her trusty horse Blaze.

During her final 4-H year, she was an International Foreign Youth Exchange student ambassador to Denmark. Anita’s work years centered on service to community.  She started as a University of Missouri 4-H Youth Specialist for Clark and Scotland Counties. She then moved to the county courthouse as clerk in the Associate Circuit Court serving judges in Clark and Scotland counties for over 20 years. She retired from the state of Missouri to become an independent agent for Hawkins Insurance Group until 2019.  She worked a short time for the Hometown Journal when it started before taking a clerk position for the Associate Circuit Court.  Her love for community was demonstrated by years of volunteer involvement with the Clark County Fair, Clark County Mule Festival, numerous community fundraisers and benefits, including the American Cancer Society, to support patient and family expenses. She would and did help anyone in need, never knowing a stranger. She thoroughly enjoyed visiting with friends, family, and neighbors.

In lieu of flowers, memorials may be directed to Tim Gray for the benefit of the grandchildren.

There was a public visitation for Anita between 10:00am and 5:00pm on Saturday, January 22, 2022, at Wilson & Triplett Funeral Home in Kahoka. There will be a celebration of life held at a later date. You are invited to share your memories of Anita and leave a condolence at www.wilsontriplett.com

To order memorial trees or send flowers to the family in memory of Anita Gray, please visit our flower store.