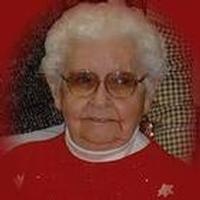 Alice had worked at the former Hemm's Café and in the kitchen of the Clark Co. Nursing Home. She and her daughter, Vivian, had operated the restaurant at the former Kahoka Sale Barn for six years. She was a wonderful cook and made sure each of her girls knew how to prepare delicious meals as well. Most of her life was spent as mother and farm wife, working side by side with Marion as they worked ground and tended to livestock.

She had a strong faith and was pianist and a member of the Seventh Day Adventist Church in Kahoka. She was a Sabbath School teacher for many years and was always taking the youth camping, having parties for them and their families, and hosting many other activities. She loved to fish and camp. She and Marion would travel each year to Cheyenne, Wyoming to the Frontier Days and Rodeo, and then travel on north to fish. She was blessed with a large family, each of whom were special to her. She cherished time spent with them and was able to enjoy them right up until the very end - her new beginning.

To send a flower arrangement to the family of Alice M. Pitford , please click here to visit our Sympathy Store.

To order memorial trees or send flowers to the family in memory of Alice Pitford, please visit our flower store.