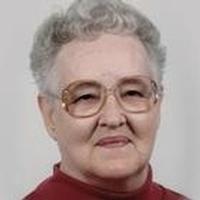 Alice was born November 24, 1929 in Oto, IA, a daughter of John and Mae Kinkeade Schulte.

She married Edward Earl Parsons on December 21, 1946 in Wayland.

She was preceded in death by her husband, Edward Earl Parsons; her father, John Schulte, mother and step-father, Mae and J.O. Galland; son-in-law, Steve Waschenbach; one brother, Raymond Schulte; a sister, Marie Cook Sawyer; and half brother, Oliver Lund.

Alice graduated from Revere High School in 1947. She was a clerk at Cecil Chrisman's store in Revere for the first half of her life and the second half she was employed at the Clark Co. Nursing Home as a medical technician.

She enjoyed quilting, sewing, crocheting and embroidery work and her family were recipients of many beautiful items they will cherish. She made her home the past several years at the Senior Housing in Kahoka and had spent time visiting and playing cards with old and new friends there. She loved having visitors, especially her children and grandchildren.

Family received friends from 11:00 a.m. until time of services.

Memorials in lieu of flowers were suggested to the Revere Fire Department, the Revere Cemetery, or the Clark Co. Nutrition Site.

To send a flower arrangement to the family of Alice M. Parsons , please click here to visit our Sympathy Store.

To order memorial trees or send flowers to the family in memory of Alice Parsons, please visit our flower store.