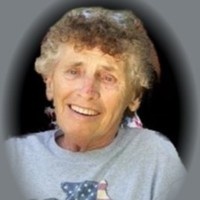 Alice was born October 17, 1939, one of eleven children, to Henry "Jake" and Elizabeth Louise Bick Logsdon.

Alice was baptized into the Catholic Church at the Shrine of St. Patrick and was also in the last graduating class of the St. Patrick School. In recent years she attended the Camdenton United Methodist Church with Robert’s family.

Alice was employed for Sheller Globe for over 20 years and was a very active in her union, 444 United Rubber Workers where she also served as steward. She worked as support for finding work for displaced workers and finding them jobs and furthering their education. She spent the next 30 years working at her son’s resort in Camdenton. Hard work was no stranger to Alice and she worked until the day her children told her "enough".

Alice had been an avid soft ball player in the day and also loved to shoot pool. She was also an avid Kansas City Chiefs and St. Louis Cardinals fan. Family was an important part of her life and she loved going on an annual "butterfly brigade" with her sisters to see as many shrines and other sites they could all dressed up in their butterfly print outfits. Most important was her love for her family and having get togethers and just being together as loved ones sharing each others lives.

Memorial services were held Thursday, January 2, 2020 at 2 p.m. at The Crossing in Keokuk, IA with visitation from 1 p.m. until services.

Inurnment will be at a later date.

The family was assisted by Wilson Funeral Home in Kahoka.

On-line condolences could expressed at www.wilsonfuneralservice.com.

To send a flower arrangement to the family of Alice L. Jenkins , please click here to visit our Sympathy Store.

To order memorial trees or send flowers to the family in memory of Alice Jenkins, please visit our flower store.