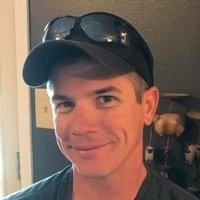 Aaron was born September 10, 1983 in Bath, Maine, the son of Doug and Rhonda Brunk Mathies.

Survivors include his parents: Rhonda and Kent Kirchner of Kahoka, MO and his sisters, Alyson (Zack) Fannon of Van Meter, IA and their children Layton, Landyn, Lily, and Lawson, Alanna (Kyle) Mickelson of Argyle, IA and their daughter Evelyn (Evie Lee), and Anna (Zech) Saavedra of Kahoka, MO and their children Kimber, Ruthie and Piper; father, Doug and Sherry Mathies of Atlantic Beach, FL and step-sister Jamie Wilkerson and her companion, Kenny Craig, also of Florida and children Katelyn and Kylie; grandparents: Gerald and Susan Brunk of Brashear, MO and Lee and Dorthea Mathies of Kahoka, MO; as well as several aunts and uncles, cousins, and other relatives.

He was preceded in death by grandparents, Lester and Dorothy Kirchner.

Aaron was a member of the New Testament Christian Church and attended Keokuk Christian Academy in Keokuk, IA fifth through eighth grades, graduating from Clark Co. R-1 High School in Kahoka, MO with the Class of 2002. In high school, Aaron played football, was active in FFA and was senior prom king. All through high school he was employed at C & R Super Market in Kahoka.

Aaron spent four years active duty in the U. S. Marines. Following his discharge he worked for Bross Construction out of Hannibal, MO. In 2010, he used the GI Bill and attended the Motorcycle Institute in Orlando, FL, earning licensing as a Harley Davidson Technician. He worked for Harley Davidson dealers in Ames, IA and then in Las Vegas, NV. Later Aaron decided to work in the electrical field as a lineman apprentice. The past few years he had been employed by Par Electrical Contractors. He was a member of Local 55, International Brotherhood of Electrical Workers.

Aaron was a good friend to any one he met. He loved life and tried to make it better for anyone he knew. He loved living a simple, uncomplicated life. He had a kind heart and always stood up for the underdog. Aaron still had a lot of "Marine" left in him and was very patriotic, always polite, and humble to others. He had decided to be an organ donor and his passing has already benefitted over 80 persons.

Aaron had recently taken up golfing and had recently purchased a new set of clubs which he was very proud of. He loved his family and was crazy about his nieces and nephews. They looked forward to seeing Uncle Aaron as much as he looked forward to seeing them. Second only to his family were his four loves: First, he loved his dog, Sam, and they mutually enjoyed taking rides in the country. Second, he loved his truck, period. Third, he loved tinkering with and riding his motorcycle. Fourth, he loved coming home to Missouri and spending time on the farm, often walking the perimeter. He had a smile and laugh that was contagious.

Memorials are suggested to the Fallen Linemen Organization or the Wounded Warrior Project.

To send a flower arrangement to the family of Aaron L. Mathies , please click here to visit our Sympathy Store.

To order memorial trees or send flowers to the family in memory of Aaron Mathies, please visit our flower store.