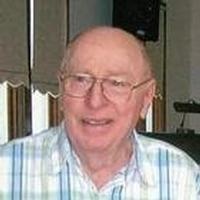 Dean was born September 15, 1926 on the family farm in Revere, MO, the oldest son of Albert and Faye Halferty Schreiber.

Dean graduated from Revere High School as did his mother, his siblings, six children and many nieces and nephews. Shortly after his eighteenth birthday, he entered the U.S. Military Service. He served in the U.S. Navy where he was a radio student during F.D.R.'s administration, translating the morse code announcing the news to his unit, something very special for a Missouri farm lad. While in the service he attended the Indianapolis 500 and the Kentucky Derby and couldn't tell you who won because of the large crowd.

He returned to Clark Co., taught school and farmed, specializing in Hereford cattle.
On December 25, 1948, following a Christmas eve date two years earlier, he married Amah Lou Boyles. He later returned to college, obtaining both his Bachelor's and Master's Degrees from Northeast Missouri State Teacher's College in Kirksville. He taught high school math in the tri-state area for at least thirty years. He was assisted in his farming by his wife and six children.

He was preceded in death by his parents; two sons, Martin and Neil Schreiber; and sister-in-law, Evelyn Schreiber.

Funeral services will be held Sunday, July 21, 2013, at 2:30 p.m. at the Peaksville Christian Church with Pastor Shawn McAfee officiating. Burial with military rites will follow in the Revere Cemetery.

Friends may call at Wilson Funeral Home in Kahoka after 9 a.m. Saturday with family receiving friends from 6-8 p.m.

To send a flower arrangement to the family of A. Dean Schreiber , please click here to visit our Sympathy Store.

To order memorial trees or send flowers to the family in memory of A. Schreiber, please visit our flower store.