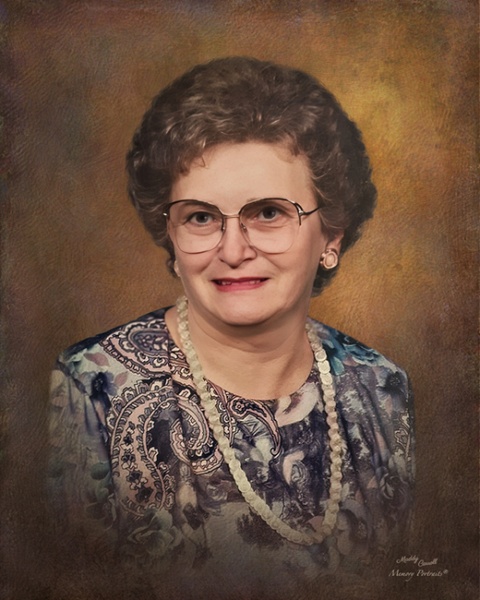 Letha was born April 1, 1937, in Wayland, Missouri to James “Everette” Haage, and Mary “Ellen” (Murphy) Haage. She was one of seven children who grew up on the farm. She worked at Fishback Market until she married Raymond Albert Sherrill on April 1, 1956. Together they had three children: Kenneth, Stephen, and Virginia.

Letha was very active as a wife and a mother and was also involved in many volunteer activities including vacation bible camps, the Moose Lodge (where she was president), and she was also president of the Christian Women’s Scholarship. Letha taught Sunday school, worked in the kitchen and was very active within her church. Letha was passionate about genealogy and loved spending time with her grandchildren and caring for her home and family. Letha was also an exceptionally talented seamstress, and enjoyed many crafts including; doll making, crocheting, quilting and she created many projects that have since become family heirlooms. Letha was also an avid gardener and loved to travel. She and Raymond would often travel to Texas and would go camping, visiting, and playing cards with friends. Even after Letha’s disabilities, she still enjoyed visiting with friends and family.

There will be a funeral service for Letha at 10:00 a.m. on Monday, July 11, 2022, at Wilson & Triplett Funeral Home. Pastor Shawn McAfee officiating.

There will be a small graveside service at 10:30 a.m., on Tuesday, July 12, at the National Cemetery in Keokuk. The cemetery requests that anyone wishing to attend arrive by 10:15am.

Memorials in Letha’s memory may be made to Disabled American Veterans Charity, or directly to the family.

To order memorial trees or send flowers to the family in memory of Letha Sherrill, please visit our flower store.